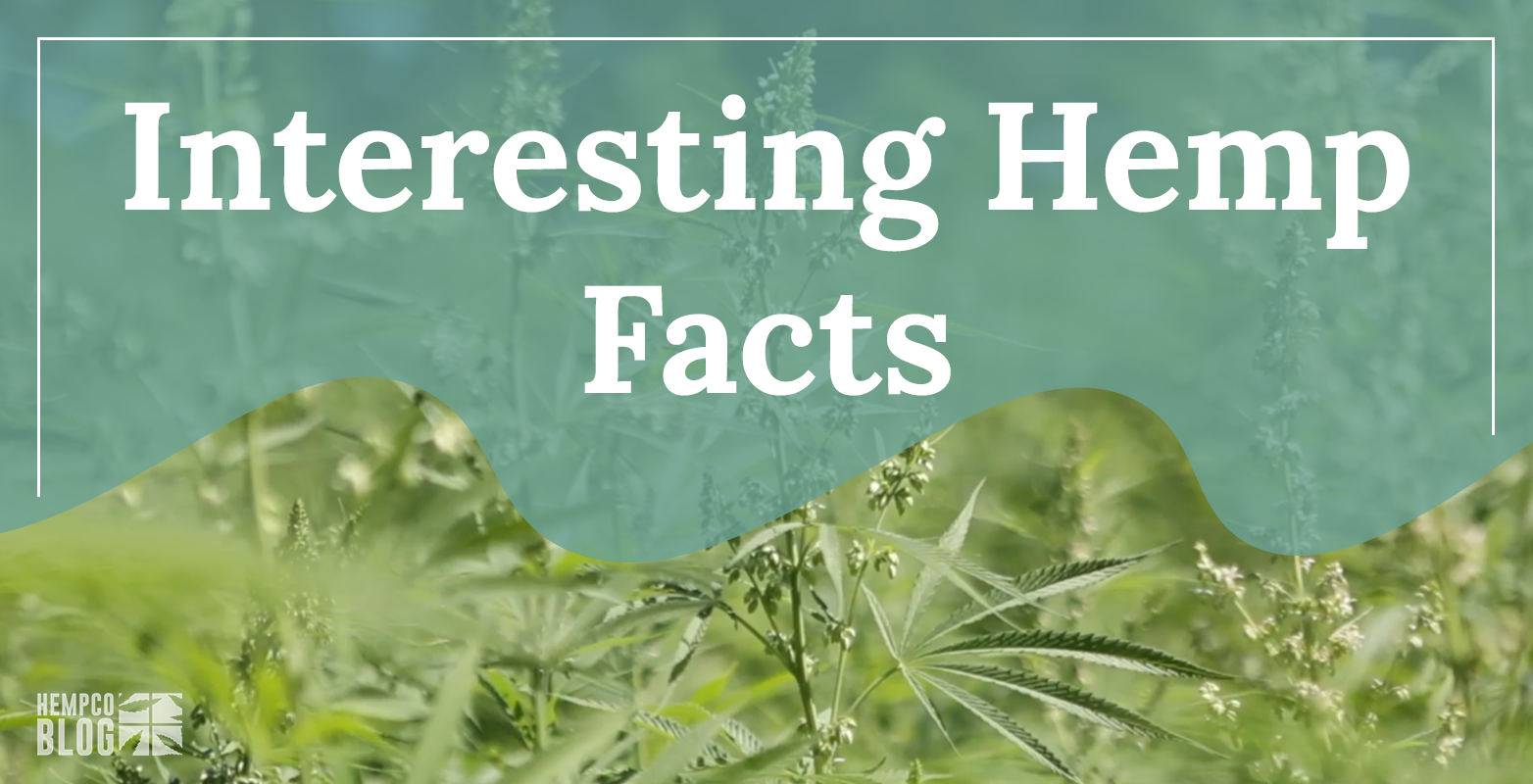 The hemp plant has so many amazing benefits, and we are still discovering them today!

Hemp is a breed of the cannabis plant called Cannabis Sativa L, and hemp is typically cultivated for its industrial issues. The cultivation of hemp is no new thing, in fact, hemp has been used for its wide range of benefits for tens of thousands of years! As hemp contains very low levels of tetrahydrocannabinol (THC), hemp plants do not have a psychoactive effect on the mind and body like cannabis plants do.

We have been sharing some of our favourite facts about the hemp plant, so we have decided to compile a list of the top 9 most interesting facts about hemp.

Both ‘hemp’ and ‘marijuana’ come from the exact same plant. In fact, marijuana is just a slang term for cannabis that was coined in the early 1900s during the “war on drugs” (aka prohibition). Though hemp and marijuana are referred to as strains or species of this plant, this is a misnomer.

Nowadays, the names are used interchangeably. However, cannabis is the official scientific name for the plant and we think it’s time we leave the prohibition era slang term in the past, where it belongs.

Hemp fibre imprints have been found and dated back to as far as 28,000 years ago, which are believed to be the beginning of a trend that developed over the course of time. Several remnants of hemp fabrics have also been found by archeologists, one of which dates back to 8000 BC in modern-day Iraq.

The Chinese also became aware of its uses around 2700 BC. Emperor Shen Nung educated citizens on its cultivation and weaving into clothing. It is believed to be one of the first fibres that were used by humans for clothing.

Hemp seed oil is derived from pressed seeds of the plant. It is gaining popularity around the world because of its numerous health benefits. After extraction from seeds, it can be processed into 2 variants: refined and unrefined oil.

Refined hemp seed oil is colourless and lacks the distinct flavour of hemp. It is added to cosmetic products because it has a long shelf-life and is more chemically stable. However, once refined, hemp seed oil loses many of its nutrients and fatty acids – this is what makes hemp seed oil so good for your skin!

That’s why we like to say only use unrefined hemp seed oil for skin care, and keep refined oils for the production of innovative new products like bio-biodegradable plastics, or sustainable fuel sources.

The unrefined hemp seed oil has a greenish hue with a nutty flavour. This oil is rich in nutrients, unlike the refined version. It has heart-healthy components like Omega-3 and Omega-6 essential fatty acids.

It is rich in antioxidants like vitamin E. It is also great for use as a natural skin and hair care product. We use unrefined hemp seed oil in all of our skincare, hair care, body care, and food products!

You can check out our unrefined hemp seed oil products here

Three main consumables can be made from hemp seed. Including the seed itself, hemp flour and hemp protein are also common forms in which hemp seed can be found. Hemp seeds have to be hulled to derive the edible, nutritionally rich inner kernels. Also known as hemp hearts, they can be added to cereals, salads and yogurt.

Hemp flour is derived from raw hemp seeds. This is after the seeds have their oils pressed out. It is also known as hemp bran or hemp powder. It can serve as a source of gluten-free flour with just one tablespoon containing 60% of our daily fibre requirement.

Hemp protein is the full ground hemp seed which means it still contains the oil. It is more nutritious than the flour because of the presence of the oil.

Carbon sequestration is the process whereby plants absorb carbon dioxide in the atmosphere. Plants use the energy from the sun to transform CO2 and water into hydrocarbons in a process known as photosynthesis. This essentially means that capable plants are able to remove carbon dioxide from the air, effectively curbing greenhouse gas emissions.

Sure enough, hemp is excellent at sequestering carbon. One hectare of industrial hemp can absorb approximately 15 tonnes of CO2. The then-formed biomass can be used for several purposes.

You can read more about hemp and carbon sequestration in our blog post about it here!

This might seem like a surprise to most Australians since they have become used to thinking of hemp as something criminal. Want to learn more? Check out this article!

Once the fibres have been removed from the stem, one of the leftover parts of the plant is cellulose. Cellulose can be used to make a growing number of bio-composites and is a strong option for sustainable packaging as we move into the future. Hemp grows very quickly, which makes it a sustainable means of deriving plastics.

Curious about hemp plastics? We go into more detail here!

Hempcrete is made from a mixture of industrial hemp fibres and limestone. It is very durable and creates a negative carbon footprint. This is due to its ability to absorb and store carbon dioxide. Using hemp for building dates back to ancient eras. Even the Colosseum had some structures made out of hemp. In 2010, the first modern hemp house was built in North Carolina.

At Margaret River Hemp Co, we love hempcrete. In fact, our sister company ‘Hemp Homes Australia’ also does a lot of work with it! Learn more about hempcrete here.

Over the years, there has been a rapid decline in the honey bee population. This could be terrible for the world’s food supply. Though hemp relies on winds for pollination, it has been found that bees particularly love its pollen.

As bee populations continue to decline, industrial hemp seems like a great option to solve this problem. Hemp is a pest-resistant, annual plant so bees can use their pollen and nectar when other crops are not in season.

There’s a lot more to why bees love hemp!

Want to hear what the buzz is about? Read more on our blog post here.

Is Hemp Plastic The Hero That Helps Solve Plastic Pollution?

Using Hemp Seed In Health & Wellness | Everything You Need To Know